The Remarkable Yet Unknown Species of India – The Slow Loris

Last month while researching for a primate tour in India I came across a unique primate – The Slow Loris. Not only are these one of 10 smallest primates in the world, they are also the only venomous primate in the world. Yes! Venomous primate!

With my interest piqued, I started studying more about this close cousin of ours. The Slow Loris comes from the genus Nycticebus which consists of four species: Pygmy Slow Loris, Javan Slow Loris, Sunda Slow Loris and our very own Bengal Slow Loris. The Bengal Slow Loris has the largest distribution of all the slow lorises and can be found in Bangladesh, Cambodia, southern China, Northeast India, Laos, Burma, Thailand, and Vietnam.

It is nocturnal and arboreal, occurring in both evergreen and deciduous forests. It prefers rainforests with dense canopies, and its presence in its native habitat indicates a healthy ecosystem. It is a seed disperser and pollinator, as well as a prey item for carnivores such as Pythons and Hawk eagles. Its diet primarily consists of fruit, but also includes insects, tree gum, snails, and small vertebrates. The species lives in small family groups, marks its territory with urine, and sleeps during the day by curling up in dense vegetation or in tree holes. It is a seasonal breeder, reproducing once every 12–18 months and usually giving birth to a single offspring. For the first three months, mothers carry their offspring, which reach sexual maturity at around 20 months. The Bengal Slow Loris can live up to 20 years.

Now since we have already told you that this is a venomous primate let us understand a couple of things: How does the ‘venom’ work? Are they venomous or poisonous? And what’s the difference between the two. 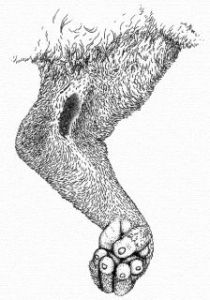 The main difference a venomous and a poisonous animal is that a venomous animal injects toxins into its victim’s body by bite or sting. A poisonous animal, on the other hand, produces toxins that are poisonous once inhaled or ingested like a Puffer Fish. Medical literature shows that human – Slow Loris injuries come from Slow Loris bites and not from ingesting their toxins. So, are slow lorises venomous? Well, not quite…. 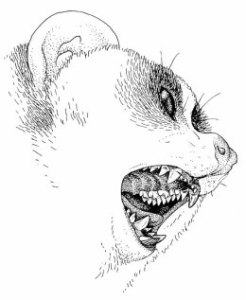 Lorises have got strong jaw muscles and pointed teeth with cutting edges easily piercing human skin or thin gloves. Health problems after Slow Loris bites may be either due to presence of a toxin produced by the animals, due to bacteria and viruses transferred by bites or due to an anaphylactic shock (extreme allergic reaction). Loris brachial gland secretion includes two toxins, made inactive by inhibitors; when mixed with saliva, after licking of the brachial glands, the enzymes from the saliva break down the inhibitors and make the saliva-secretion mixture toxic.

Anaphylactic shock: in people, regularly in contact with slow lorises, saliva may repeatedly come into the body through tiny, maybe invisible wounds. If the Loris keeper develops an allergy against this saliva, an allergic shock is possible (independent from the quantity of substance causing it, within seconds to minutes, in one case described lasting two hours), although this is a rare disease. Symptoms of anaphylactic shock may be: initially burning tongue and throat, a sensation of heat, red, itching skin, wheals, very low blood pressure, shock, convulsions of muscles (pain), pain in the heart and kidney region, respiratory problems (constriction of airways), heart problems, and possibly unconsciousness. Occurrence would make an immediate call for medicinal help necessary; first aid: measures against shock such as lying posture with legs a bit higher, assuring sufficient blood supply for necessary organs.

Slow lorises have needle-like teeth called dental combs or tooth combs on their lower jaw. Paired with the constant licking of the brachial gland, it is not surprising that one would assume the dental comb plays a part in injecting brachial gland exudate into unsuspecting victims. However, this is not the case, based on these published reports, it seems that Slow Loris bites are not venomous the reaction is largely to the exudate’s allergen secreted by the brachial glands which is like the Fel d 1 allergen in domestic cats… just more potent I guess.

The biggest challenge that these beautiful creatures face today is the meat and pet trade. People will often buy Loris as pets as they look adorable however, as in the case of all exotic pets most of these pet owners do little to no research about the species and have no clue about how to raise one in a home environment often unknowingly creating an environment or a situation harmful for the species.